First introduced in 2009, the C49 composite 4 blade fan has greatly improved the performance of frost fans and uses the most efficient blade on the market. The C49 has increased coverage, lower fuel consumption, is quieter and has a longer blade life. C49 blade sets can be fitted to most other brand fans to improve their performance.

The C59 composite 5 blade fan operates at lower rpm, whilst covering the same area as the C49 with even lower noise levels.

The technology behind the C49 machine has seen it grow in popularity to become the best-selling frost fan in Australia and New Zealand. 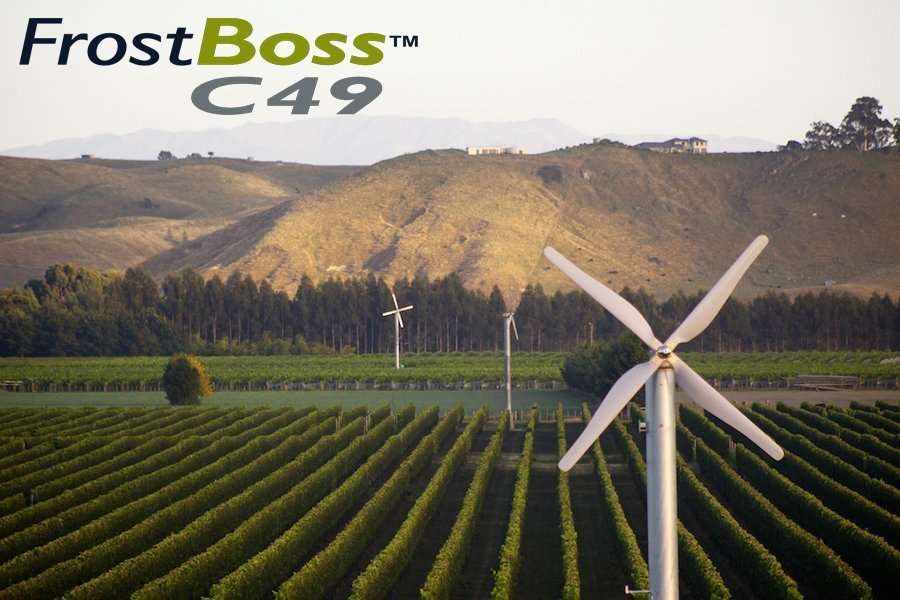 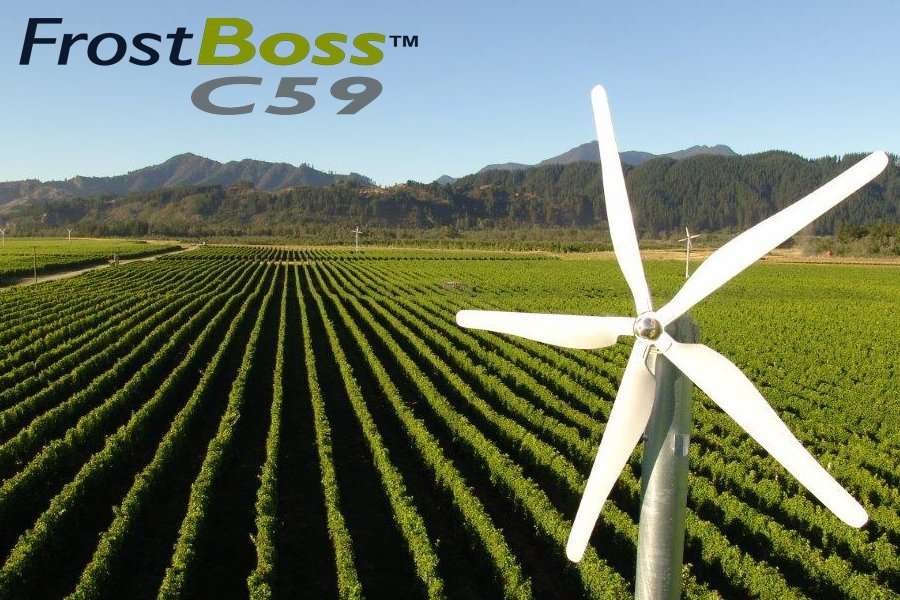 The C59 composite 5 blade fan operates at lower rpm, whilst covering the same area as the C49 with even lower noise levels.

- Fully installed on site and commissioned

- Integral 500 litre lockable fuel tank – sits under the engine with capacity for approximately 24 hours running time. There is a fuel level sensor, which prevents the engine from running the fuel tank dry. Hence the fuel system will never need to be bled if the fuel supply runs out

The new FrostBoss® controller is the most up to date,reliable and robust start module available in manual or auto start.

Fan Efficiency. The FrostBoss® C49-4 blade fan provides the greatest coverage for the lowest fuel consumption of any frost fan on the market. In a continental climate, like Australia, with large temperature inversions and low katabatic wind speeds, the C49 can achieve coverage of approximately 10ha. The same fan in an island climate, like New Zealand, in a cold valley with a strong katabatic drift and a small temperature inversion will achieve coverage of approximately 6 – 7 ha.

The noise signature from the C49 is smooth, and at a low level, without the distinctive “Iroquois” chopping sound of the 2-bladed fans. The 4 blade fan, by virtue of its greater blade area, allows a higher blade pitch to be used without running the risk of the blades stalling. This allows the fan to run at a slower speed, thus making less noise, while still doing the same work.

It also converts more of your fuel into useful wind and less into turbulence and noise. Evidence from actual frost events shows that 4 blade fans have a greater penetration capability than 2 blade fans, thus giving them greater coverage.

Why Does The C49 Blade Shape Look So Different?

The C49 fan blade is twisted from the tip to the root in a progressive manner, whereas all other frost fans are twisted linearly. The progressive pitch of the blade gives it a distinctive 3 dimensional shape, especially towards the blade root. This combined with the progressive increase in blade width, and the rounded blade tips, gives improved performance and an aesthetically pleasing blade shape.

Is Thrust Important in Measuring The Performance of A Fan?

A uniform wind momentum is best achieved with a blade design that has the blade angle pitched progressively from the tip to the root. In this way, the air flows uniformly across the fan diameter, and creates a uniform blast of wind. The C49 fan has over 20 degrees of progressive pitch in the blade.

On the other hand, some 2 blade fans have only 5 degrees of pitch between the tip and the root of the blade. This is nowhere near enough pitch variation (called twist) to achieve a uniform wind momentum. Instead, the blade tips end up creating all the wind momentum, which mixes with the slower air in the middle of the fan blast, introducing unnecessary mixing, which absorbs energy from the wind stream. This in turn dilutes the momentum of the wind stream, before it even gets a chance to drive out into the orchard or vineyard.

Thrust is a useful indication of how much power the engine is putting into the fan, but it gives no indication about the uniformity and penetration capability of the wind stream. This is a bit like a car wheel-spinning … the power is going into the wheels (thrust) but the wheels are making a lot of noise and turbulence.

Why Do C49 Fans Spin More Easily in Natural Wind, When They Are Not Running?

C49 fans spin very easily when an ambient wind hits them, from any direction other than edge-on to the fan plane. This quickly turns the fan out of the wind thus avoiding shock loading. Two blade fans, on the other hand, tend to rock on the teeter assembly for a bit, before spinning in the wind. Even if spinning slowly, a two blade fan will continue to rock on its teeter assembly. In areas that experience strong winds, large diameter, two blade fans can be subjected to considerable shock loading in changeable wind conditions, resulting in damage to the blade attachment assembly.

If you are outside Australia, please complete the Enquiry Form here.